Just a few years before the covid pandemic broke out, Drubwang Sangye Nyenpa Rinpoche began a great series of transmissions at Benchen Monastery in Nepal. It is a series of empowerments, oral transmissions and teachings for the largest collections of classical texts in the Kagyu tradition.

So far, Rinpoche has already given Chod Wang Gyatsa empowerments, the so-called "One hundred empowerments of Chod". It is complete transmission of teachings and practices from the Chod tradition. Moreover, the Kagyu Ngag Dzö, which is the collection of all the tantras brought by Marpa Lotsawa to Tibet, and the Dam Ngag Dzö - the teachings of the eight early lineages of the Tibetan Buddhism, have so far been given from among the five treasuries of Jamgon Kongtrul Lodrö Thaye.

The transmission to the largest of the Lodrö Thaye’s treasuries, Rinchen Terdzö - the treasury of all termas - has been moved to Rumtek at the request of His Holiness Karmapa. It is scheduled to begin on June 14th 2023. The complete transmission will take between five and six months.

Later this year, from December 6th to 15th 2022, the transmission to Shejey Kunkhyab Dzö (known as the "Treasury of Knowledge") will be given at Benchen Monastery in Kathmandu. The text written in Tibetan consists of four thick volumes. It is a long text that covers all aspects of Buddhist teachings, from vinaya up to the tantra. Drubwang Sangye Nyenpa Rinpoche will give the oral transmission and the teachings. Below is the official announcement of the monastery.

As for the dates of transmission to the fifth treasury, Gyachen Ka Dzö, there are no news yet. 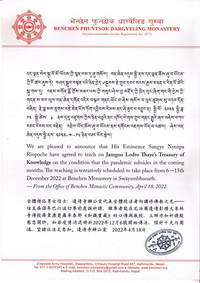