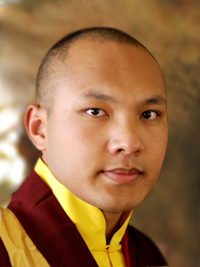 Karmapa means "the one who carries out buddha-activity" or "the embodiment of all the activities of the buddhas." In the Tibetan tradition, great enlightened teachers are said to be able to consciously arrange to be reborn as a teacher who can carry on the teachings of a predecessor in a prior life. Pursuant to this tradition, the Karmapas have incarnated in this form of manifestation body (Skt. nirmanakaya), for seventeen lifetimes, as of the present, and all have played the most important role in preserving and propagating the Buddhist teachings of Tibet.

The Seventeenth Karmapa was born in 1985 into a nomad family in the Lhatok region of Eastern Tibet. He was enthroned in 1992 in Tsurphu Monastery in Central Tibet. At Tsurphu, the Karmapa studied the Buddhist sciences of mind, learned ritual, and practiced sacred arts, such as dance. Each day he received hundreds of visitors from throughout Tibet and around the world. He eventually began to offer empowerments and participated in various rituals at the monastery. At the age of about 10, His Holiness recognized the rebirth of reincarnate teachers, including such eminent teachers as Pawo Rinpoche, Jamgon Kongtrul Rinpoche and the Dabzang Rinpoche.

On December 28, the fourteen-year-old Karmapa pretended to enter into a solitary retreat, instead donned civilian garb, and slipped out a window. Leaving Tsurphu Monastery with a handful of attendants, he began a daring journey by car, foot, horseback, helicopter, train and taxi, a heroic journey which was to become the stuff of headlines throughout the world. On January 5, 2000 he arrived, to the great surprise and overwhelming joy of the world, in Dharamsala, India, where he was met by His Holiness the Fourteenth Dalai Lama. He received refugee status from the government of India in 2001.

His Holiness continued to live near Dharamsala. He has been permitted by Indian governmental authorities to engage in tours to Buddhist sites in India, and annually traveled to Bodhgaya and Sarnath for important Kagyu ceremonies over which he presides. He has also travelled to Ladakh, Tibetan settlements in southern India, Calcutta and elsewhere in Himachal area. In 2008, His Holiness received permission to travel to the United States to teach the dharma for his first time in the West.