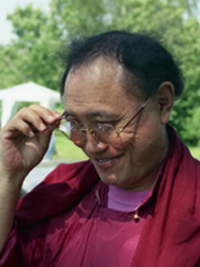 Chime Rinpoche was born in the vicinity of Benchen Monastery in eastern Tibet. Recognized as the reincarnation of Radha Phuntsok, a great patron of the monastery and a prominent practitioner, he received thorough education suitable for one of the highest Lamas of the Monastery.

He left Tibet during the Chinese invasion and travelled with His Holiness Karmapa, Sangye Nyenpa Rinpoche, Tenga Rinpoche and others to India. He soon left for the UK where he got married. He has been living there since 30 years. He works at the Tibetan Department of the British Library and runs several Dharma centres.

Rinpoche is known for his direct demeanour, humour and a way of teaching accessible for the Westerners.