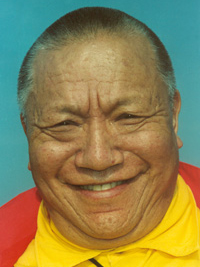 Namse Rinpoche was born in Kham, Eastern Tibet in 1930 and became a monk at the age of fifteen. From ages 16-21, he did intensive studies of the basic fundamentals of Tibetan religious language, etymology, grammar, and poetry. He underwent the serious studies of the Tripitaka, Vinaya, Sutra and Abhidharma, and also the Prajna Paramita, Utara Shastra, Sutra Lankara, the five states of Madhyamika and many other versions and commentaries as well as schools of Buddhist thought and teachings. From ages 21-24, Lama Namse did a three-year, three-month, three-day retreat with intensive practice of the core of the Kagyu teachings such as the Six Yogas of Naropa, the meaning of Mahamudra and other related practices.

From ages 24-26, he studied Buddhism further, especially the five treasuries of Jamgon Kongtrul the Great. From ages 27-30, Lama Namse went on an intensive pilgrimage to many sacred places and private retreats. When he was thirty years old, Lama Namse left Tibet as a refugee. He came to India, and from ages 32-35, did another three-year retreat. At this time he also became a retreat master for many new retreatants. At age thirty-seven, he came to Sikkim to the Dharmachakra Monastery and received the collections of the empowerments of the Kagyu Ngagzod and Damgang Ngagzod practices.

From 1974 to 1981, Lama Namse served as vajra teacher all over Europe, especially in France. Since 1981, Rinpoche has served as H.H. Karmapa´s representative in Canada, and as Director of Karma Sonam Dargye Ling (formerly The Karma Kagyu Centre of Toronto).

The Venerable Choje Lama Namse Rinpoche, passed away on the 30th November 2010 at 10:15 morning in India. His passing was peaceful and then Rinpoche remained in the meditative state of thugdam. Prayers were held at Sherabling under the direction of H.E. Tai Situ Rinpoche.